Part of a series of tutorial articles about a Student class.

Code examples referred to on this page can be found here: https://github.com/ucsb-cs156/student-tutorial/tree/ex09.

In this example we show how to use the code coverage and mutation testing reports to find which tests are missing and get to 100% test coverage.

In the case of Student.java we add the missing unit tests for the toString method.

In the case of Main.java, we exclude the class from the code coverage analysis altogether.

Both of these are important things to know how to do; sometimes it’s important to have code covered by tests, and other times, it’s important not to waste time getting test coverage for code where it isn’t really adding any value.

Starting where we left off

When we open up the reports (as we did in ex08) we see that the line of code not covered in Student.java is the line for the toString method: 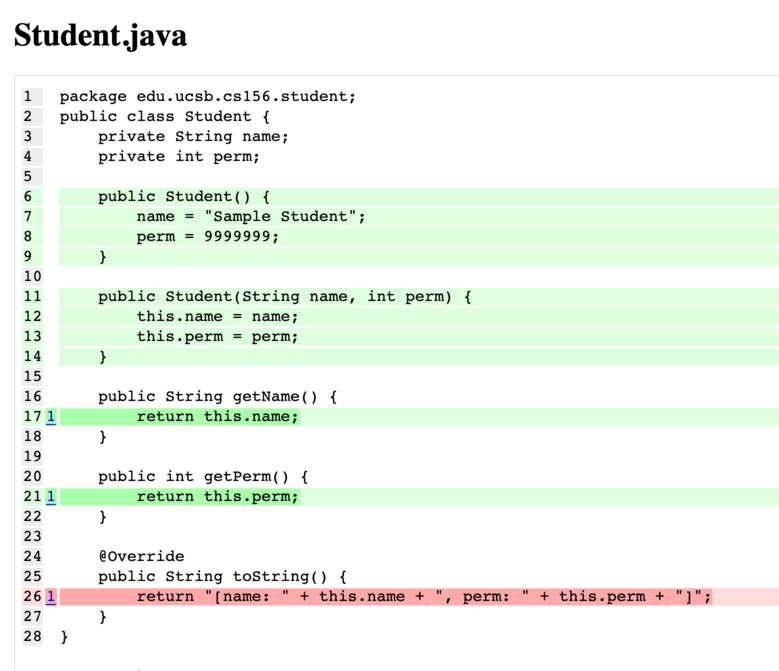 So, let’s write a JUnit test for the toString method.

We’ll add that to StudentTest.java which is located in the folder src/test/java/edu/ucsb/cs156/student/

Note that we always start a JUnit test with @Test. This is what marks the method as one that should be run when we type mvn test.

With this test in place, the first thing to do is run mvn test to ensure it compiles and passes:

On our first run, we get this:

We run again and get this:

Now we can run the mutation tests and see if we were successful. We’ll add clean to the line so that we only have one pit report:

The result is this:

Now the question arises: should we write tests for this Main?

If we look at what this Main is doing, we can see that it’s purposes were really only to:

So while we could write test cases for this main method and this Main class, it may be better to instead either:

Because it is handy to keep the file around, we’ll try the second approach instead.

In the pom.xml, we find this <plugin> element for Pitest:

The part to focus on is this:

We simply specify the name of the class we want to exclude, using it’s full package name. When we run pit again, we see that we now have 100% coverage

If you open up the full report, you’ll see that Main.java no longer appears.

Our jacoco report, however, still shows Main.java as having no coverage. We can take a similar step to configure the jacoco report in the pom.xml as highlighted in this post.

This code can go inside the <plugin> element for jacoco, just before the closing </plugin> tag:

This excludes the Main. Note that for jacoco, we need to specify .class on the end, while for Pit, we leave that out.

Now that we have 100% test coverage both in our jacoco and our pit report, we can proceed to actually adding some more functionality to our Student class. We’ll do that in ex10.