This chapter reviews and reinforces some basic concepts of Object Oriented programming—concepts that should already be familiar to you from CS24 and CS32 (in C++).

So, while the concepts in this chapter should be review for you, they are important enough that it is worth going over them again, especially because:

The concepts we want to review here are the ideas of:

In Computer Science, we often talk about things being “stateful” or “stateless”—and this can be sort of an abstract concept. This chapter is designed to make it more concrete, so that, as the authors of the Head First books are fond of saying it “sticks in your head”.

The main point of this page is to get you thinking about how instance variables and methods interact with each other.

It may seem like an “obvious” point, but nevertheless, let it sink in—the values of instance variables affect what happens when you invoke a method on an object.

One other thing to pay attention to on this page: the UML-ish diagrams, like this one: 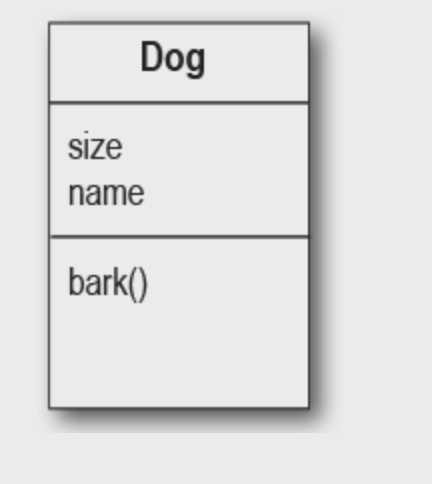 UML stands for “Unified Modeling Language”. UML is a language, but not in the sense that Java, or C++ is a language. One has to take a broader view of the word “language” to understand how UML is a language. It isn’t quite as free-wheeling as English or Spanish, but it isn’t a language that can be strictly expressed in ASCII (or even Unicode) characters in a text editor.

Instead, UML includes rules for creating diagrams that represent various things that software designers need to express in order to capture and communicate a software design—things like classes (in the OOP sense), interactions of users with a system, etc.

We aren’t going to try to take on learning UML in this course, but I want you to at least be familiar with what UML is, in case you encounter it (or someone asks you about it at a job interview.)

The UML diagrams in this book are pretty simple to understand—they have the following structure: 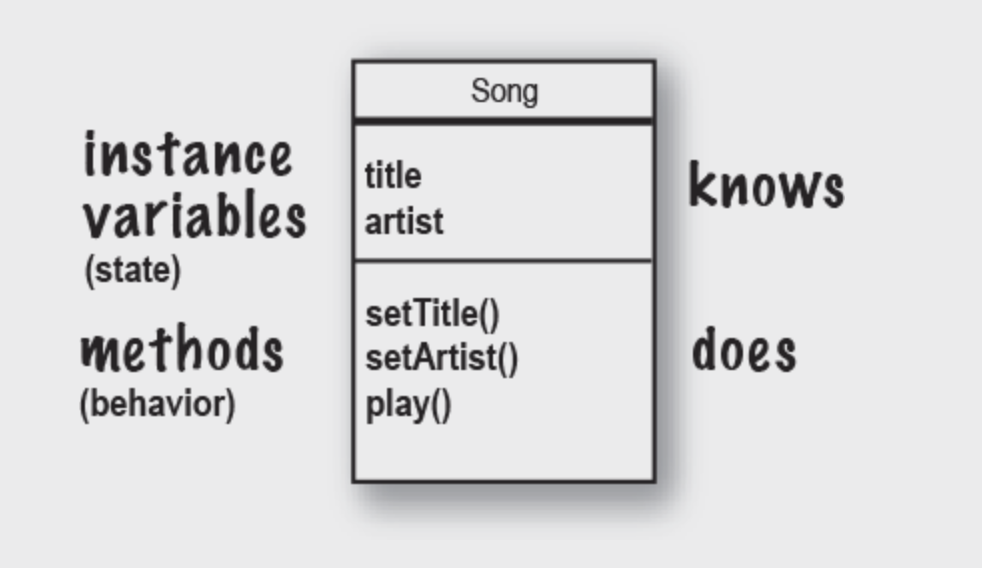 When you encounter this type of diagram, I want you to be able to understand what it means. You may encounter diagrams like this in the “real world” too, as well as in later courses, so it is good to get used to what they mean.

The size affects the bark

Ok, so now that we understand how these UML-ish diagrams work, the example on this page should be pretty clear.

And, these pages have some pretty simple code that reinforces the ideas that the state of an object (e.g. the size of a dog) is stored in its instance variables—and that affects the behavior of the object’s methods.

This is, of course, a silly example—but the authors are trying to use it to make a point that will stick in your head.

You can send things to a method

One of the interesting points that the author makes here that I try to emphasize in my courses, but sometimes gets glossed over is this:

Inside a method in Java (or a function in C/C++/Python), a formal parameter acts like a local variable—one that is initialized with the value of the argument to the function (the value the caller passes in.)

This idea of “formal parameter” as “just a special case of local variable” is a very useful one—and one we’ll encounter later on as we talk about some common programming errors (like unintentional shadowing of instance variables, parameters, etc.)

Another important point on this page is to establish some conventions that the authors will use later about how the words parameter and argument are going to be used.

The author’s choices here are fairly standard ones, though not entirely universal. Some authors use:

I’ll try to stick to the author’s choices this quarter.

I assume you understand parameters and arguments from CS8 and CS16, so we don’t need to dwell on this further.

You can get things back from a method

Just like in C/C++, methods can return things, and they have a return type.

Since this is not different from C/C++, again, we won’t belabor the point.

You can send more than one thing to a method

Ok, you can have multiple parameters to a method. Again, nothing very surprising here.

Java is pass-by-value. That means pass-by-copy.

This pages emphasizes the way that parameters are passed in Java—this notion that when you pass something into a method, it gets copied into a local variable, but the variable back in the main program is not affected.

That’s true with primitive types (boolean, char, byte, short, int, long, float, double) and with immutable reference types such as String. But as we’ll see, if the thing copied in is a reference to a mutable object like an ArrayList, then although the parameter passing is pass-by-value (i.e. pass-by-copy), it can seem to be behave more like pass-by-reference.

We’ll try to spend some time on decoding this mystery.

For now, let’s just say that you may want to experiment with some code that passes an int, a String, and an ArrayList into a method and makes a change to the parameter inside the method. See what (if anything) has happened to the original object when you come back from the method. This will help you begin to understand the subtleties involved here.

The first Q: and A: in the “There are no dumb questions” section on this page is particularly important (they are all good, but the first one is particularly so—it reinforces the ideas we started to get at earlier in the chapter.)

The bullet points are also worth reviewing—some of them are obvious, and “duh” sorts of things, but there are a few subtle tricky ones, such as the “implicit promotion” and “explicit cast” stuff.

Cool things you can do with parameters and return types

There is this “note” next to the UML-ish diagram that talks about “using naming conventions” and “following an important Java standard!”.

There is something called a “Java Bean”, which is a particular kind of Java object—one with getters and setter methods that follow this exact naming convention.

That is, if we have an instance variable brand:

Don’t misunderstand—it is true that you can choose whatever names you like for your methods, and the alternative names shown above will compile, and will work. They just don’t comply with the “Java Bean” standard.

And if you stick with the standard name, then you get certain benefits:

So, as a result, I’m going to strongly encourage you to follow this particular naming convention.

“Encapsulation”, the way the authors are using the word here, basically means making sure that your instance variables are private, and are only accessible through methods (e.g. getters and setters).

I was taught that this was actually called “information hiding”. The way I learned it, the word “encapsulation” referred to the idea that the instance variables and methods were both stored in a single “syntactic construct”, i.e. a “class”.

But, what the heck—these are all just words. The idea that instance variables should be private, and only accessed through methods is the key idea here—no matter what buzzword you use to describe that idea.

Again, probably not a new idea if you were paying attention in CS24 and CS32—but worth reviewing.

How do objects in an array behave?

Note the difference in syntax between Java and C/C++ in both how we declare, and how we allocate space for the array:

In Java, if we declare Dog [] pets; we are declaring a variable that can store a reference to an array of Dogs. Initially, though, there is no such array.

If we then initialize that variable by instantiating the array, as shown below, we create an array of seven “references to Dog”, but still we have not created any Dog objects. We have created one object only, referred to by the reference pets, which is of type Dog []. That object is an array containg seven null references.

Only if we write a for loop that iterates through the array, allocating Dog objects, do we create any Dog objects at all, e.g.

Here’s some code to illustrate this:

In Java, we cannot create an array of Dog objects at all, neither on the stack, nor on the heap.

And we cannot create an array of Dog references that is “stored” on the stack.

The reason is that arrays themselves are objects in Java, and in Java all, and I do mean all objects live on the heap. The only variables that can be on the stack in Java are the eight primitive types, and reference variables.

So, in Java a Dog object itself, can never be on the stack, and neither can any array.

The only thing related to Dogs or Arrays that can be on the stack is a reference.

That can be a reference to a single Dog, as in:

Or it can be a reference to an array of Dog references, initially null

But, strictly speaking, you can NEVER create an “array of Dog” in Java, as in a contiguous chunk of memory with Dog objects laid end to end. That just doesn’t exist in Java.

Now, we can have an array of int in Java (or any other primitive type):

So, no dogs created here:

The pictures on p. 83 make this point very clear, so please study until you understand. Allocating the Dog objects is a separate step:

When dealing with “plain old arrays” in Java, you can have an array of primitives, or an array of references to objects (similar to an “array of pointers” in C/C++). These are your only choices.

You cannot create an “array of objects” as you can in C/C++.

This page makes a very important point about instance variables. Rather than tell you what point that is, I’m going to phrase it in the form of a question that you need to answer by reading:

This section discusses == vs. .equals(), which is one of the most common sources of error in Java, especially among Java noobs.

So read it—over and over again, until it sinks in.

Then, skip ahead to Chapter 11, and read these three sections (the links will work as long as you login via https://bit.ly/ucsb-or first.)

Those three sections are a bit advanced, and if not all of it makes sense on first reading, that’s ok. But to really understand the difference between == and .equals, and what it means for two objects to be “equal” in Java, it’s important to have that other part of the picture.

(I’m not sure why the authors waited until Chapter 11 to cover the rest of the story—I think that discussion should be moved to Chapter 4. That’s why your pay tuition, and the UC pays my salary—so I can read ahead and help you find things like this.)

We may discuss this in lecture or in a video as well.