In most projects in this course, when running npm test, you are actually invoking a script defined in package.json like this:

Some documentation for this can be found here:

By typing the following command (note the extra -- in the middle) you can get a list of command line options for npm test.

A reference for these options appears here: https://jestjs.io/docs/cli

Running only some tests

One of the most useful command line options is the simple -t option, which takes a regular expression for the test description as its argument.

Running only tests from a certain file

Suppose the test you are working on is in the file frontend/src/tests/components/Commons/CommonsTable.test.js.

You can copy this path in VSCode by right clicking at the top of the file tab and selecting Copy Relatve Path, like this: 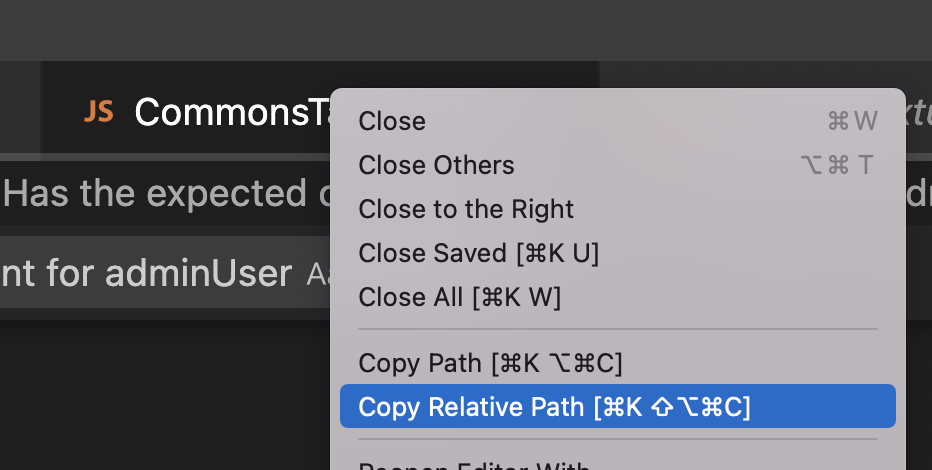 Then you can paste that into this command (note that you must use the arrow key on the command line to delete the prefixed frontend/ since you are already in that directory:

This runs only tests from this file, as shown below:

Running only tests with a certain description:

Suppose you are working on this test:

If you type the following, it will run only tests that match this description:

As it turns out, when I ran this example, there were two tests that matched this description, in two different files. One passed and the other failed, as shown in this output:

Since the argument is a regular expression, we can often specify just part of it with the same effect. For example, this has the same effect as the longer command above:

Here’s what that looks like; note that it matches the output above in terms of which tests were run:

We can also restrict to running only tests from a certain source file, for example, only the tests in frontend/src/tests/components/Commons/CommonsTable.test.js by combining the two command arguments:

Now we get only the single test run: